by Tech Smarti
in Windows
0

Almost all of us who use computer need to take screenshot some time or other for different reasons. It may be a page of some digital transactions that have no options for print, but one needs to keep records. A copy-protected page that one wants to capture or some portion of the work that needs to be snapped and sent to someone. It may be the entire screen that needs to be captured or some selective part, and one can do it effortlessly with the existing windows 10/8/8.1/7 operating systems having the latest versions or can download some free app available over the net and use them. But if one has the inbuilt option in the Windows operating system, then it is easy to fulfill the objective of taking the screenshot. Let us explore the possibilities with windows inbuilt options. Check simple steps to how to take a screenshot on windows 10/8.1/7 desktop computers and laptops below. 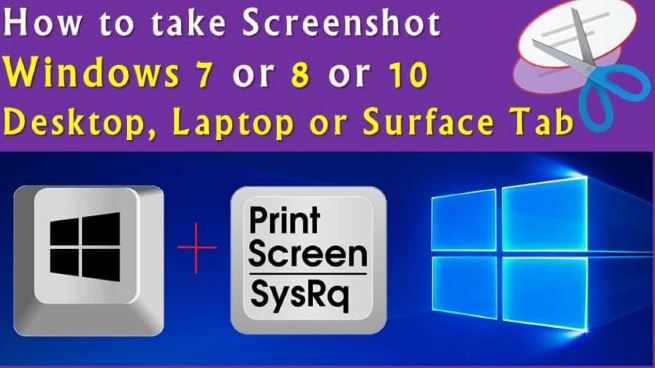 One of the most popular methods of capturing a screenshot that is available in the versions of Windows mentioned above is to press the Print Screen or PrtSCn key usually available on the topmost row of the keyboard. One can also press the Ctrl key and the PrtScn key simultaneously and capture the images of the matter being viewed on the screen at that moment. The captured screen is saved n the clipboard, and one can open any photo editing software like Paint and paste the image bringing it from the clipboard and do the necessary editing if required like selecting some particular area if the whole screen image is not needed and save it in the desired format.

If one is using the latest version of windows, then taking the screenshot of the whole screen is possible by pressing the Windows key that can be generally found on the bottom left corner of the keyboard with the Windows sign and the PrtScrn key in unison. If one is using windows 10, then the screen will dim for a few milliseconds while the process of the screenshot is taking place. The image captured is stored inside the Screenshot folder found inside the Picture Library. The image is saved in .png format with the serial number that depends on the number of shots taken.  One can also find the captured screenshot under the Photos app in Windows 10 by exploring the Folders followed by Pictures and Screenshots. One can also get a backup copy in the clipboard too.

Adjusting The Prtscn Key On Certain Keyboards To Capture The Screenshots:

Certain keyboards have multiple functions of the PrtSrn key and might not work unless the Fn key found at the left lower end of the keyboard is tapped. The Fn key works as the lock for multimedia keys and the function keys found on the top row. If one has such type of keyboard, first press the Fn key for unlocking the keys on the top row and then use the above-mentioned methods to capture the screenshots. Pressing the Fn keys first in this type of keyboards will activate the top row that includes the PrtScn button.

Again if one is using any tablet of Microsoft running on Windows 10 operating system, one needs to follow different guidelines as there is no Print Screen or PrtScn key on them. One can then use the following methods to print the screen.

Using The Snipping Tool In Windows:

The Snipping Tool is a perfect app for using the computers running on Windows 10, 7 or 8.1operating system. It is one of the best applications for creating a variety of screenshots. Editing the image light is also possible using the app. Type Snipping Tool in the search box of the Start Menu for Windows 10 and 7 or the Start Screen on Windows 8.1 and then click the mouse to open up the tool Snipping Tool menu box. One will get many options like the Rectangular Snip, Window Snip, Full-Screen Snip, and many more and use the desired option to capture the screen.

Taking the screenshot is often required for useful purposes, and there are many ways for making them when one is using the Windows 10, 8.1,8 or 7 operating systems with the latest version on their laptops, desktops or the Tabs from Microsoft. The inbuilt options are enough to take great screenshots and here is no need of any other third-party applications or software unless one is looking for some added or extraordinary features. With little effort and knowledge of taking the screenshots on the computers and other related digital devices running on Windows, it is straightforward to take a screenshot, do the required editing if required and save them in the desired format for the purpose the shots are being made. The above guide will help you to have the best screenshots and enjoy the benefits.

iCloud Login Sign in – How to Login to iCloud.com on Your iPhone or iPad?

How To Install KineMaster On PC Windows Latest Version Free

How to Download the SnapTube App on your Windows PC

iCloud Login Sign in - How to Login to iCloud.com on Your iPhone or iPad?